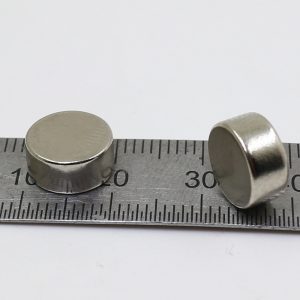 All the rare earth magnets elements are ferromagnetic which means that the elements are more or less like iron and can be magnetized so that they become permanent magnets. The Curie temperature of all the Ferro magnets is below the temperature of a room. When the Ferromagnets are in pure form, the magnetism of the elements is in low temperature. The Ferro magnets easily form different compounds with help of transition metals like cobalt, nickel, and iron. Generally, the rare earth magnets are made of iron, nickel, and cobalt.

Reason for the strength of rare earth magnets:

The crystals of all the materials of rare earth magnets magnetize itself with crystal axis. All the rare earth magnets are made of microcrystalline grains which are all aligned in a magnetic field during its manufacture to keep all the magnetic axes in the same direction. The result of the incomplete f-shell makes the element more magnetic in nature. Basically, all the unpaired electrons on the outer most shell create the magnetic field of the element.

Remanence: This basically helps in measuring the strength of the magnetic field
Coercivity: The resistance of the material to become demagnetized
Energy Product: The basic density of the energy which is magnetic
Curie temperature: The exact temperature where the material loses its magnetic properties

In the market, the Neodymium magnet is popular, nice price, big power, and easy processing. likes the N52 Neodymium magnet which has very big power.  But the working temperature just 80 degrees, that is its weakness. in fact, there have some  n54 neodymium magnet factories.  they can produce a very stable N54 magnet. But still not popular , because not too many products need such high-grade magnet.

Right now there is work going on in the United States of America for finding out a substitute for rare earth magnets. The whole search is sponsored by ARPA-E which is also known as The Advanced Research Projects Agency-Energy. All this research has been boosted because all the rare earth magnets were being exported from China earlier and since the new export lays of China all the countries are more eager to make their own substitute of rare earth magnets. China is the best place to find all the minerals of a rare earth magnet right now.